© Copyright Qode Interactive
Monsterplay | Should I Sell My Tokens Before or After Token Swap?
Monsterplay
17314
post-template-default,single,single-post,postid-17314,single-format-standard,ajax_fade,page_not_loaded,,side_area_uncovered_from_content,qode-theme-ver-11.1,qode-theme-bridge,wpb-js-composer js-comp-ver-5.1.1,vc_responsive

Should I Sell My Tokens Before or After Token Swap? 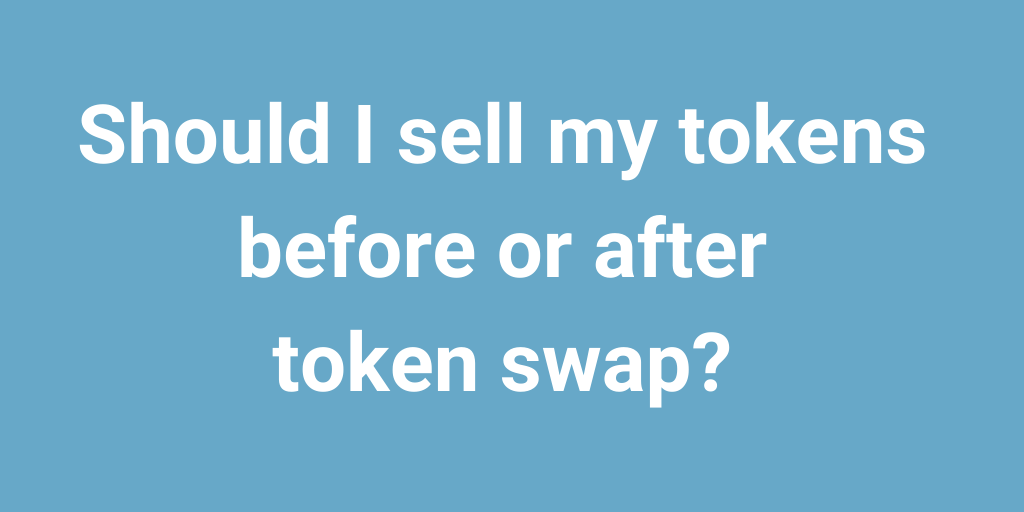 01 Oct Should I Sell My Tokens Before or After Token Swap?

Posted at 00:35h in Blockchain by David Freuden
Share

This article has been published in: Medium;  Global Banking and Finance Review; Altcoin Buzz; TechInvest; The Pick

Both articles are focused on what happens to token price once a project swaps their ERC20 tokens to their native token.

Part 1, this article, is focused on token price impact projects immediate and soon after their token swap. Part 2 is focused on understanding the longer impacts of the token as a direct result of what, if any, quality exchange list these new native tokens. You can go to Part 2 now by clicking this link “Why Many Native Tokens Will Die After Token Swap”

I invite you to share your thoughts below and please share these articles with your crypto-investing networks.

In 2017 and 2018 many projects were launched using Ethereum’s ERC20 token and subsequently scheduled token swaps onto their native tokens once their own blockchain was ready.

They launched using ERC20 for several reasons, including:

Asides ERC20 tokens, the Ethereum network offers other types of tokens for projects including:

What is a token swap

A token swap is a process whereby a cryptocurrency is transferred to another blockchain at a predefined rate. Token swap usually occurs when a crypto project launches its own blockchain and wishes to move its tokens from another blockchain (like Ethereum) to its new network. In some cases, the projects don’t have their own blockchain but decide to move their tokens to another platform, such as Mithril (MiTH) moving from Ethereum to Binance Chain. After the token swap, the ETH pairing of the tokens is usually removed from exchanges and only that of BTC is left.

My intention when I started researching this question was to confirm the best time to buy or sell tokens for projects heading into a token swap I researched over 20 projects, some that are still in various stages of their token swap.

It is important to note that external forces can have significant impacts on the outcomes of a token swap. These include bull/bear market stages; the marketing and communication quality, duration, budget and success at attracting enthusiasts; the number, and relative quality, of the exchanges that listed their ERC20 token and if/how they supported the token swap and the enabled native token trading; the tokens liquidity; the market cap of these projects; the level of short term speculation activity prior to a token swap, etc. This is not an exhaustive list of external factors, just a list of several variables that also influence the token price.

I found that the primary driver that dictated token price success are the exchanges. Specifically:

I will leave it up to you to consider and evaluate the influence other variables that I mentioned above may have had on the projects that have already completed their token swap, and the projects that you may be evaluating right now.

Should I Sell Before Or After The Token Swap

From the 20 projects that I researched I divided them into two groups and then compared the results:

Group 1: This group comprised native tokens that were listed on exchanges immediately after the token swap.

Group 2: This group comprised projects were there were, or still are, delays in listing their native token on exchanges.

One of the key criteria for a token swap to be successful is that the exchanges that already list the ERC20 token needs to support the token swap and confirm a date that they will enable trading of the new native token. The difference between Group 1 and Group 2 is influenced directly by the exchanges, so it’s critical that the project management team have a good relationship with the exchange and manage all communications with their token holders and the crypto community.

If an exchange does not enable trading of a native token after the token swap, then effectively, token holders are now holding a non-tradable token. This situation is exacerbated when a percentage of tokens have not participated in the token swap and continue to trade on the exchange. We have found examples of token swaps where this happened and the negative impact on their token price was significant.

With their native tokens listed on exchanges immediately after their token swap, both these projects recorded significantly more favourable price performance. However, the success level of these two projects could also be attributed to the marketing hype surrounding them. EOS had the biggest ICO in the history of the crypto space, generating roughly $4 billion in the process. EOS mainnet launch was also eagerly anticipated by the crypto community since it was going to provide competition to Ethereum by offering a faster and more scalable blockchain compared to Ethereum.

As an ERC20 token, EOS was listed on 34 cryptocurrency exchanges and the eagerness of most of the exchanges to partake in the token swap would definitely have contributed to its success. The token swap was also immediate, with tokens frozen as soon as the mainnet was launched. The token swap ended on June 2 following the mainnet launch, with unswapped tokens lost afterwards.

Vechain was designed to boost transparency and product management in the supply chain sector, which saw it generate a lot of interest from shipping companies and other businesses in the industry. The team allowed the token swap for 6 weeks, from July 21 to September 1st, 2018. Vechain was listed on 26 exchanges prior to its token swap and 19 of them participated in the swap process.

CHX has been the worst performer on the list. While the token swap began on June 1, 2019, 30 days later their native coin is yet to be listed on any cryptocurrency exchange. Although BitMax helped with the token swap and WeOwn have stated that BitMax will list their native token, as of 4 July, almost 5 weeks after freezing ERC20 tokens, BitMax has not enabled their native CHX token to trade.

After 30 days of not having their native token listed on any exchanges, the CHX token price has dropped by 50% since the start date of token swap on 1 June. According to the team, there is no time limit for the swap as users are allowed to do so whenever they wish. This decision may also have impacted price as it removed any sense of urgency for token holders to migrate to a native token.

Whilst comparing multiple token swaps helps identity projects with better metrics it is important to research what other factors influenced these results, and if there are patterns to help identify what has impacted success across more projects. The most successful token swaps on the list had a well-defined timeline, making it a matter of urgency for holders and exchanges to carry out the process. Projects with open-ended token swap dates such as Own, and Zilliqa performed negatively by comparison in the days and weeks that followed the toke swap initiation.

The two most successful projects, VeChain and EOS had very good products and excellent marketing team. Some of the tokens that performed negatively on the list like Cybermiles and Mithril are less popular and known in the crypto space. So their lack of market presence could have played a role in their price action post token swap.

With the exception of CHX , as projects reached the 30-day mark post token swap the price of the tokens tended to follow the market trend. EOS, for instance, dropped by 28% 30 days after its token swap, implying that the positive impact of the token swap had waned and the general market conditions affected the price performance.

Most of the token swaps were carried out between last year and this year. However, token swaps carried out last year had more significance to those conducted this year. In 2018, EOS, Tron, Icon, Vechain, AION, and Pundi X all went through a token swap. This year, the biggest names are Binance, Zilliqa, and IOST.

The stated purpose of my research was to identify if I should sell before or after the token swap. My research showed that a few weeks after token swap projects tended to return to following the market trend, which means that any potential price benefit needs to be looked at over a shorter time frame. I chose a 3-day time period after the token swap.

When I look at both EOS and VeChain I note that at the time they both had considerable brand recognition, market presence, and well communicated token swap. The market was also still relatively favourable.

When I remove both EOS and VeChain from the 3-day results above, it is clear that the potential gain of a few percent is not worth the risk of engaging in a token swap, especially as over half of the projects showed negative results and also carry the risk of delay native token listing.

If you are interested to learn more, I invite you to read Part 2 of this article : “Why Many Native Tokens Will Die After Token Swap”