The Future of Data Storage is Decentralized

16 Sep The Future of Data Storage is Decentralized

Posted at 21:44h in Blockchain by David Freuden
Share

This article has been published in: Brave New Coin and Medium;

The contemporary best practice approach to data storage is the 3-2-1 rule. The rule states that you should “keep three copies of your data on two types of storage media with one copy kept off site.” For enterprises, business, and governments, this is the minimum standard that must be met in order to protect data from loss.

For the majority of individuals, however, this usually translates as data storage on a local hard drive, a back-up on an external hard drive, and since early 2000, critical and excess data living in the cloud. In this case, ‘in the cloud’ refers to computer data storage in which the digital data is stored in logic pools, said to be in ‘the cloud.’

The physical storage of this data can be spread across multiple servers and multiple locations owned by a hosting company. Cloud storage companies are responsible for keeping the data online and accessible, in both the virtual and physical environments. Individuals and businesses and governments can purchase or lease data storage capacity. The data is accessed via a cloud computing service, API or by applications that utilize the API, such as cloud desktop storage, or content management systems.

Cloud Storage is a significant market and according to MarketsandMarkets is projected to grow from USD 50.1 billion in 2020 to USD 137.3 billion by 2025, at a compound annual growth rate of 22.3% during the forecast period.

Data breaches have been making headlines for decades with no end in sight. The top 10 data breaches in 2018 affected 2.438 billion personal accounts. Barely a week goes by without a significant data breach, hack, or security incident. As an example, this week The Times reported that “Companies collecting data for pubs and restaurants to help them fulfill their contact-tracing duties are harvesting confidential customer information to sell. Legal experts have warned of a ‘privacy crisis’ caused by a rise in companies exploiting QR barcodes to take names, addresses, telephone numbers and email details, before passing them on to marketers, credit companies and insurance brokers.”

The risk, when we see articles like this where providers sell personal data, or headlines about hacks and data leaks, is that it is likely to be you as the individual, not the cloud storage company, whose private data (private files, personal information, identity) has been compromised and is now in the hands of potential bad actors who were never supposed to have access to your data.

A number of blockchain start-ups have proposed blockchain based alternatives to existing cloud storage providers. Each is building a different solution but the models are similar. A decentralized cloud storage platform would have several advantages over existing providers. These can include better security, anonymity (no signups), no servers, lower costs, monetization opportunities, and no trusted third parties.

A blockchain and decentralized cloud storage solution divides data into multiple encrypted segments that are interlinked via a hashing function. These segments are secured and distributed across a decentralized network. Strong encryption through public/private keys and hashed blocks provides extremely reliable and robust security that cannot be breached even by sophisticated hackers.

As well as placing your data beyond the reach of hackers, the public and verifiable nature of blockchains allows users to track and monitor the storage and backup history to confirm that the original data has not been tampered with.

These blockchain projects are each tackling the cloud storage problem with a slightly different value proposition. A decentralized storage solution removes much of the risk of data breach and exploitation, whether intentional (entities that collect and store data providing or selling or providing third parties, including governments) or unintentional (hacks and theft).

Filecoin (FIL) describes itself as a decentralized storage network designed to store humanity’s most important information. Filecoin has been developed by Protocol Labs, a San Francisco-based dev shop backed by VC firms Andreessen Horowitz and Sequoia Capital. Filecoin founder Juan Benet is positioning the Filecoin network as a next-generation marketplace for data storage. Filecoin is a potential competitor of centralized data storage providers Amazon, Dropbox, and Google – as well as content delivery networks like Cloudflare.

Three years after its record-breaking $257 million initial coin offering (ICO) the Filecoin network is finally close to launch. The start-up says its mainnet will launch at block 148,888, which is expected this week.

Like many ICO projects, Filecoin has missed deadlines. It had first planned to deploy to mainnet in mid-2019, for example. Today, Filecoin has more than 200 projects and 1000 developers ready to keep working on the protocol following this week’s launch.

The 0Chain (ZCN) product, 0Box, is a web, desktop, and mobile platform for people to store and share their personal data including auto-upload from mobile and smart-sync on desktop. Its focus is to improve on current centralized storage privacy, transparency, private and anonymous sharing. On the 10th September 0Chain launched 0Box in Beta for iOS. 0Box is a private cloud that enables you to share private files anonymously. It does not require any log in or email credentials.

Saswata Basu, the founder of 0Chain says that “0Box is the first private cloud with anonymous sharing. Users are free from fear of breach and exposure. The expectation is to outperform DropBox, although our core values are privacy, anonymity, and transparency.”

Once a user downloads the 0Box app, available for iOS and Google Play, the user can set up an account using their mobile number and begin storing and sharing files with anonymity and privacy. 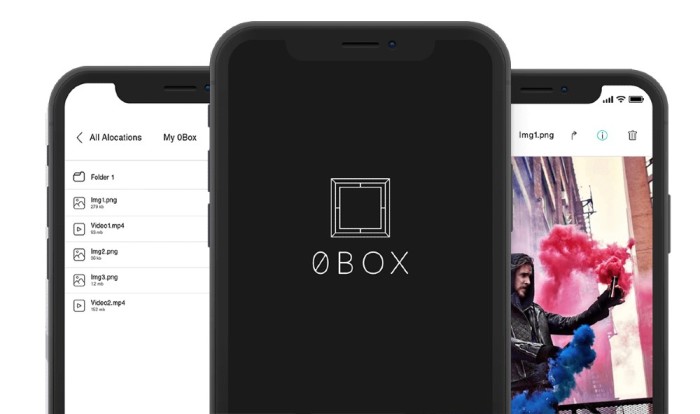 The 0Chain privacy protocol provides the customer with ownership and control of their data. It protects their data by distributing it across servers with cryptographic keys registered on the blockchain, so that the hacker needs to have all keys making it near-impossible to breach. In addition, 0Chain records all activities immutably on the data ledger. And, 0Chain provides secure sharing of data to customers, partners, internal groups, and employees.

The dStorage platform is a native smart contract platform on 0ChainNet, which is a permission-less, fast finality, scalable blockchain. Client protection is accomplished through a serverless 2FA protocol for individuals and a cryptographic multiple signature protocol for exchanges and businesses.

Another unique feature of 0Chain is that it has improved data privacy and control by enabling encryption on the user’s device itself, before any data is shared or sent to be stored in the cloud. Data encryption is happening at the user end, (mobile, tablet or desktop), before it is shared or uploaded and it can only be unencrypted with the users personal keys.

Where native encryption is available, the user retains total control of their data, not even the providers can access the data without the user’s private keys. This is not what happens now with current cloud providers AWS, Microsoft, Google, IBM, etc

0Chain will be focusing on consumers (B2C) and blockchain projects initially as they have faster adoption than enterprises. It aims to be onboarding paying clients in Q1 2021 after their mainnet launch.

Storj Labs (STORJ) is building a distributed storage platform that uses the excess capacity available on devices such as servers and individual desktops. Company CEO Ben Golub says that “the goal is to provide IT organizations with an alternative to storing data inexpensively using storage resources that have been vetted by Storj Labs.”

Storj Labs have built an open source object storage system compatible with the S3 API used by Amazon Web Services (AWS). It’s called the Tardigrade Decentralized Cloud Storage Service and is named after the notoriously durable and hard to kill [Tardigrade](https://en.wikipedia.org/wiki/Tardigrade#:~:text=Tardigrades%20(%2F%CB%88t%C9%91%CB%90rd,called%20them%20little%20water%20bears.) microorganism. The open-source network has around 19 petabytes (19 million gigabytes) of capacity and is hosted on thousands of nodes all around the world.

When a new file is uploaded, it is encrypted and then sliced into 80 fragments that are then distributed across separate nodes. Should any single node be compromised or taken offline, a user only needs 29 pieces to reconstruct a file.

Storj Labs pays businesses and individuals who have excess storage capacity, giving these parties a way to monetize excess capacity. Each storage provider must pass a series of data stewardship tests for a period of time before being allowed to become a member of Tardigrade.

The Sia blockchain storage ecosystem is being developed by Nebulous, Inc, established in 2014. It launched the Sia Storage Platform in March 2015. Based in Boston, Nebulous is funded by Raptor Group, First Star Ventures, Fenbushi Capital and INBlockchain.

Participants on the Sia network can rent hard drive space from each other. This decentralized approach makes Sia more secure, and is a cheaper solution than using a provider like Amazon. Users who have unused space on their hard drive can rent the space out and monetize it in the form of Siacoins (SC).

The Sia blockchain enables the Sia marketplace to operate without a central third party. Sia secures storage transactions with smart contracts, creating a reliable, secure and affordable storage product. Sia says that “no one person or organization can censor or deny access to data—not miners, not developers, nor any government. We believe Sia’s distributed, decentralized storage technology is stronger, more secure, more efficient, and more equitable for the entire ecosystem.”

Existing cloud storage providers have to duplicate any user data stored with them to provide the necessary levels of reliability (redundancy). Unless the user is enabled to utilize client-side encryption, the files are typically stored ‘as is’ on the server. So anyone who gains sufficient access privileges on that server can access the files.

As blockchain and decentralized cloud storage solutions start to enter the market offering increased data security and value-add services, such as user-control encryption and privacy sharing, the incumbents will start to acknowledge how blockchain can improve their services. Whether they partner with existing providers, find white label solutions or develop their own blockchain solutions from the ground up remains to be seen.

It will take time for companies and organizations to get comfortable enough to consider decentralized storage services as an alternative to public cloud organizations. However, given blockchain’s ability to provide the highest possible level of security with tamper proof auditing, there is a ready market once solutions mature.