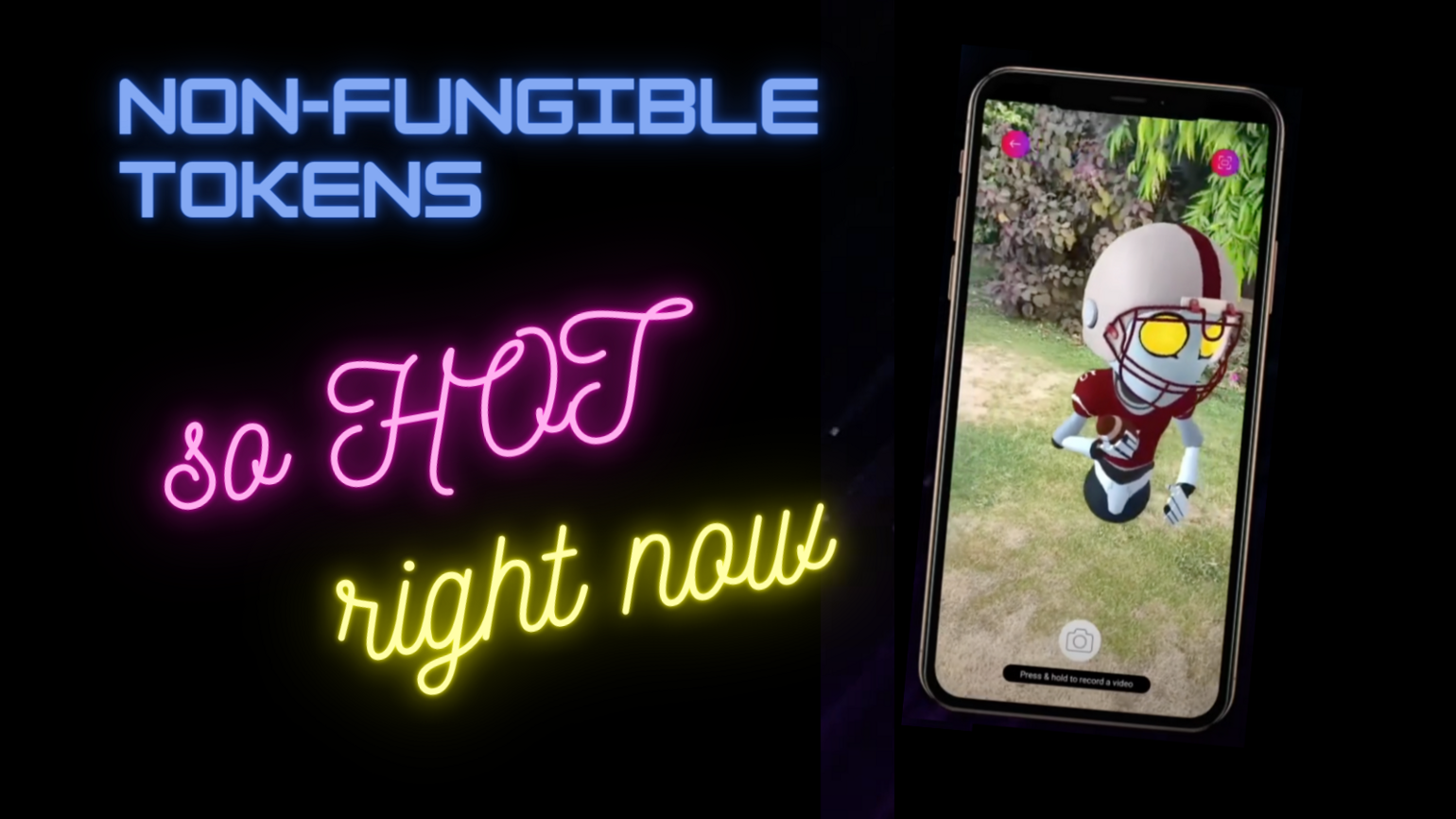 Posted at 11:29h in Blockchain by David Freuden
Share

The non-fungible tokens (NFT) category gained global crypto attention over the past few weeks as a result of Rarible (RARI) incorporating yield-farming into their adoption strategy.

Rarible is a dapp that enables users to create original artwork as an NFT and sell it through their marketplace. Users are rewarded/incentivized with RARI governance token, with the largest share of tokens allocated to users when they sell their NFTs. This drove many crypto degens to create NFT and start promoting it to their networks and followers.

What is a non-fungible token (NFT)

Firstly, NFT are not new. The launch of the first NFT-like token was around 2012 with the introduction of Coloured Coins, aka Bitcoin 2.x, which was to be built atop of the Bitcoin network, but the most common example of an NFT is the ERC721 that operates on the Ethereum network.

There are others, such as the ERC 1155 which was developed by Enjin cofounder as a new standard for defining video game tokens, which also runs on the Ethereum network.

Non-fungible tokens are not fungible, meaning that each one is unique. One NFT is not equal to any other NFT, either in value or in the properties of the token itself. Each token is assigned a digital hash that distinguishes it from every other NFT of its kind. This feature enables NFTs to act as a proof of provenance. This is why it is becoming so valuable to prove ownership and authenticity for forms of intellectual property, such as original artworks and in-game tokens, as well represent real world assets such as shares and real estate.

In the world of gaming and collectibles, NFT are also referred to as Digital Collectibles.

NFT — get their own category

On 23 September Coingecko added a dedicated NFT listing category, showcasing a curated list of NFT-focused blockchains. This isn’t just a response to the current hype and successful addition of a DeFi category on their website, but part of a larger NFT strategy that Coingecko have been implementing since April 2019 Coingecko, when they first announced their interest in NFTs launching NFTGecko to Build a Non-Fungible Tokens Community.

NFT are being developed across multiple industries with growing applications including Gaming, Artwork and Collectibles, Virtual and Augmented Reality, Real Estate, Event Ticketing, Brand Licensing and Tokenizing of real world assets. Nike even applied for an NFT patent back in 2019).

I have profiled below three of NFT projects that I find seriously interesting across categories: Art & Collectibles, Gaming and 3D animated collectibles that incorporate VR & AR. For a full list of NFT blockchains you can visit the new Coingecko NFT page:

Rarible enables users to create a digital collectible with no coding skills and sell it on their marketplace.

As they noted in one of the medium articles, RARI is about Collectibles, yield farming, liquidity mining with RARI governance tokens being rewarded for using their platform. At of time of writing this article their token price is up over 1700% since July.

With a focus on user generated artwork, RARI enables intellectual property creation of artwork with a proof of provenance provided by the NFT. It also facilitates the sale and terms of sale on their marketplace, and at near zero costs.

Since their official launch November 2019 the have generated real usage:

In early sept RARI announced that they raised an undisclosed amount in a pre-seed round led by CoinFund. They stated that this investment will help Rarible develop a community-governed, blockchain-based NFT marketplace as well the $RARI governance token.

$RARI is first and foremost a governance token. You can think of it as a reward to genuine buyers and sellers on the platform: 75,000 $RARI are distributed every Monday starting from 07/20/2020 among active marketplace participants, also giving them a voice in governance.

$RARI is designed to enable the most active creators and collectors on Rarible to participate in the Rarible present and future, to vote for the platform upgrades, request features, curate and moderate.

Rarible is a community-governed marketplace, aiming at becoming a fully Decentralized Autonomous Organization (DAO). $RARI token is the first step in this direction.

Terra Virtua is very new and I am a massive fan of how they are approaching Digital Collectibles as a whole ecosystem.

Terra Virtua is providing users a deeper sensory experience by taking Digital Collectibles into a multiplatform VR and AR world. Similar to how Pokémon Go integrated AR to take gaming into the real world. ( As a reference, Pokemon Go accrued more than 550 million installs in its first 80 days from launch!).

Leveraging their experience in gaming the team understands the opportunity of morphing the digital world with the real world and using AR and VR to achieve this.

“We would, as much as possible, create the assets in 3D and not only that, we would animate them, thereby ‘bringing the collectibles to life’.”

Terra are launching with their own range of character-based 3D animated creatures, called ‘vFlects’ along with licensed collectibles in 2D and 3D from The Godfather, Top Gun, Sunset Boulevard and Lost in Space. Later in the year they will also be releasing licensed collectibles from Pacific Rim and World War Z.

In addition to offering a marketplace for 3D interactive range of unique and licensed digital collectables, Terra Virtua are launching an entire ecosystem where owners can store, display, interact with and show off their collection

The Terra Virtua AR App: a fun mobile app which allows you to photo or video yourself interacting with your collectible in a real-world environment, and then share on social media.

The Terra Virtua Fancave: a 3D personal, and customisable, environment in which you can show off your collectibles. Offering multiple customisable rooms and populate the walls and shelves with all manner of NFTs and bring them to life when your friends come visiting! The VR version of this has also been developed and planned for release in 2021.

The TerraDome: a HUGE version of the Fancave where you will store and play with your larger items, such as the F14 fighter jet from Top Gun or the giant Pacific Rim mechs.

“The key mission of Terra Virtua is to bring NFTs to the mass-market. The video games experience of the core team gives us a strong focus on UX and UI and so by making the process both frictionless and compelling we hope to bring the exciting world of interactive Digital Collectibles to the mainstream.” Gary Bracey CEO Terra Virtua

Heading into Halloween they are working towards a ‘Big Event’ with a a number of artworks by a top-tier comic book artist. They will be holding a ‘VIP Preview’ event prior to launch and a Twitch-based Q&A with the artist. For 2021 they are planning more licensed collectibles and also plan on enabling User Generated Content.

For more information on Terra Virtua visit their website

In 2009, Enjin launched the Enjin Network, a gaming community platform which boasts over 20 million users. In 2017, Enjin began building a suite of blockchain products that enable anyone to easily manage, explore, distribute, and integrate blockchain assets.

Rather than using the ERC721 standard for NFT, Witek Radomski, Enjin co-founder and CTO, developed ERC-1155, a new standard that will define video game tokens on the Ethereum blockchain. The Enjin token already powers over 1 billion digital assets.

However, the ERC1155 is not just for gaming, its application will benefit a wide range of industries, from entertainment and finance to industrial design, artificial intelligence, real estate and more.

The core concept behind ERC-1155 is that a single smart contract can govern an infinite number of tokens. An ERC-1155 contract made for a game could contain a wide variety of items, from weapons and armour to health potions, magic spells, super powers, etc.

There is so much happening in with Enjin that I that I highly recommend you head over to Enjin blog to get up to speed.

THE FUTURE IS NFT

What really excites me is that I see these three projects growing new markets, businesses and economies, rather than fighting for market share from existing businesses or being just a business process improvement.

Additionally, these projects stand out because the users don’t have to interact with the underlying blockchain technology, but benefit greatly from the tech. So they are ripe for mainstream adoption .

Non-Fungible Tokens open the door to moving all intellectual property rights to digital content. And whilst I believe all three of these projects will be massive, they are just the beginning for NFT adoption. CoinFund wrote a great article about this to announce their investment into Rarible, you can read it here.